Urban canals and rivers are an increasingly common end-point for consumer plastics, but can be kept clean using litter traps that retrieve floating plastic debris before it can enter seas and oceans.

KEY CONSIDERATIONS: Litter trap technologies take advantage of natural forces such as water currents and wind to effectively capture plastic debris before it can reach the sea, requiring no energy to function and respecting the natural environment.

More than half a million plastic items reach the oceans every year from the urban waterway network. In England and Wales, abandoned plastics account for 59% of the litter found in canals, while in Amsterdam, 60,000 kilograms of plastic are retrieved from its 100-kilometre canal network each year. To rid the oceans of plastic, we need to not only clean up what is already out there, but also stop new plastic from entering the ocean: we need to close the tap.

Sources: The Guardian, Silicon Canals and The Ocean Cleanup

As plastic waste accumulates in the ocean at alarming rates, the need for efficient and sustainable remediation solutions is urgent. One solution is the development and mobilization of technologies that either 1) prevent plastics from entering waterways or 2) collect marine and riverine plastic pollution. Litter trap technologies are cost-effective devices that stop the diffusion of plastic litter in waterways at its source, retrieving plastic from rivers, ports, harbors and canals before it enters our seas and oceans. These systems take advantage of natural forces such as water currents and wind to capture plastic, requiring no energy to function and respecting wildlife and the environment.

Litter traps are placed in the opposite direction of the water current so plastic debris is carried towards the opening of the trap by currents and winds. Once litter is trapped inside, it will not be able to escape even if the current changes direction (although there are easy escape routes for fish and other animals including birds).

The Interceptor™
Debris entrapment systems like The Interceptor have the current carry captured plastic onto a conveyor belt that continuously extracts debris from the water and delivers it to a "shuttle", which automatically distributes the debris across six dumpsters and, using sensor data, fills containers equally until they reach full capacity (50m³). When the Interceptor™ is almost full, it automatically sends a text message to local operators to come and collect the waste. Operators then remove the barge, bring it to the side of the river, empty the dumpsters, and send-off the debris to local waste management facilities. The Interceptor™ is 100% solar-powered, extracts plastic autonomously, and is capable of operating in the majority of the world’s most polluting rivers.

The Seabin V5
The Seabin V5 is a “trash skimmer” designed to be installed in the waters of marinas, yacht clubs, ports, and any water body with a calm environment and suitable services available. The unit acts as a floating garbage bin skimming the surface of the water by pumping water into the device and capable of intercepting: floating debris, macro and micro plastics (and even micro fibres with an additional filter). The Seabin V5 is easily equipped with oil absorbent pads able to absorb petroleum-based surface oils and detergent predominant in most marinas around the world. Visit https://seabinproject.com/locations/case-studies/ to see where the Seabin is being used around the world.

StormX
StormX is engineered to handle powerful stormwater runoff and capture gross pollutants at urban "hot spots". Commercial grade, reusable nets provide full capture of gross pollutants as small as 5 mm, including organic materials (such as leaves) that could reduce the levels of phosphorous and nitrogen in our water. This economical solution to litter and debris in stormwater runoff is highly effective for “first flush.” To prevent flooding, built-in overflows allow heavy runoff to flow unimpeded.

PumpGuard
The PumpGuard is an efficient pre-screening device that utilizes disposable mesh nets to capture solids and protect pumps, rotating equipment, disinfection systems and other machinery from potential damage by removing debris from the waste stream. PumpGuard can be designed to operate in conjunction with pump stations, between the primary and secondary clarifiers and downstream of the headwork screen.

Shoreliner
The Shoreliner is a floating waste collector for sea ports that uses canvas submerged in the water to about 50 cm to collect both plastic waste and micro-plastics. The Shoreliner guides the collected waste to a collection and removal unit.

Mr. Trash Wheel
Mr. Trash Wheel, officially called the Inner Harbor Water Wheel, is a trash interceptor that removes trash from the Jones Falls river as it empties into the Inner Harbor in Baltimore, Maryland. Sustainably powered and built to withstand the biggest storms, Mr. Trash Wheel uses a unique blend of solar and hydro power to pull hundreds of tons of trash out of the water each year. See https://www.mrtrashwheel.com/ for more information.

River Watch
River Watch (Sungai Watch in Indonesia)has developed an online platform that uses GIS mapping and artificial intelligence to monitor these plastic river cleanups. The River Watch map identifies intervention points along rivers and waterways, with live imaging and hyperlinked data files on plastic collection and processing at each intervention point. This data can be used to better understand the flow of plastic waste debris in Bali's waterways, including volumes, types, brands and ultimately likely sources. This data can be leveraged by local authorities to develop effective upstream prevention policies.

River Watch is also monitoring and installing physical low-tech trash barriers in Bali, catered for smaller streams and rivers (a stream can be as big as 2 meters and a river as wide as 20 meters). From floating "Trash Booms" for rivers to "Trash Blocks" for smaller streams, they have partnered with German tech start-up Plastic Fischer to test out these solutions in Bali. They have a daily operation team that is charged to clean up each of their locations, with collected waste sorted at mobile sorting stations where it is washed, sorted, weighed and sent off for recycling.

CLEAR RIVERS
CLEAR RIVERS prevents plastic litter to enter our seas and oceans. CLEAR stands for: Clean-ups, Litter Traps, Education, Awareness and Recycling. CLEAR RIVERS organizes clean-ups to remove plastic litter from rivers and to involve the local population and organizations. Litter Traps are installed in the ports (including the Port of Rotterdam, the Port of Brussels and the Indonesian island Ambon). Education about plastic pollution, the causes, and needed solutions are given at all levels of the educational system. Awareness is increased amongst local population and organizations, to involve them in acting towards a plastic-free sea. Recycling is used to give new value to the plastic litter we retrieve, and to prevent the plastics to be littered again.

Plastic Free Venice
Venice is an additional example of an urban waterway tourist destination, like Amsterdam, that suffers from plastic pollution in its canals. The non-profit organization, Plastic Free Venice, aims to stir consumer awareness in its efforts to reduce plastic in Venice's ancient waterways.

Canal and River Trust in the UK
In the UK, the Canal and River Trust works with the Welsh Government, volunteers and communities across England and Wales to transform over 3,219 kilometres (2,000 miles) of canals and rivers into spaces where locals "spend time and feel better." Their work includes not only waterway stewardship, but also the promotion of waterways to the 8 million plus people who have them on their doorstep, "so that many more people benefit from their free, accessible and local source of wellbeing."

River Clean-up Races, River Tisza, Hungary
The Hungarian initiative Plastic Cup (PET Kupa) has greatly contributed to raising awareness of the plastic pollution of the River Tisza. Plastic Cup is a non-profit, non-governmental initiative launched in 2013 to clean up the Tisza and its floodplains from the plastic waste brought there by floods. It was initiated by a filmmaking NGO, Filmjungle Society, who is specialised in wildlife and conservation documentaries. This unique initiative uses waste itself to fight back against the pollution – the Plastic Cup started out as a race (named after the prestigious America’s Cup) where teams compete in waste collection as they float down the river on self-built boats made from waste. After eight years, there are now multiple races each year on both the Tisza and Bodrog rivers.

Indian design of floating trash barrier by AlphaMERS has stopped 2200 Tons of plastics in one year from reaching the sea. All installations visible on Google Earth. You must check this out.
Web www.alphamers.in 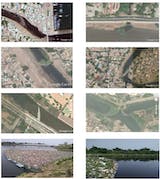